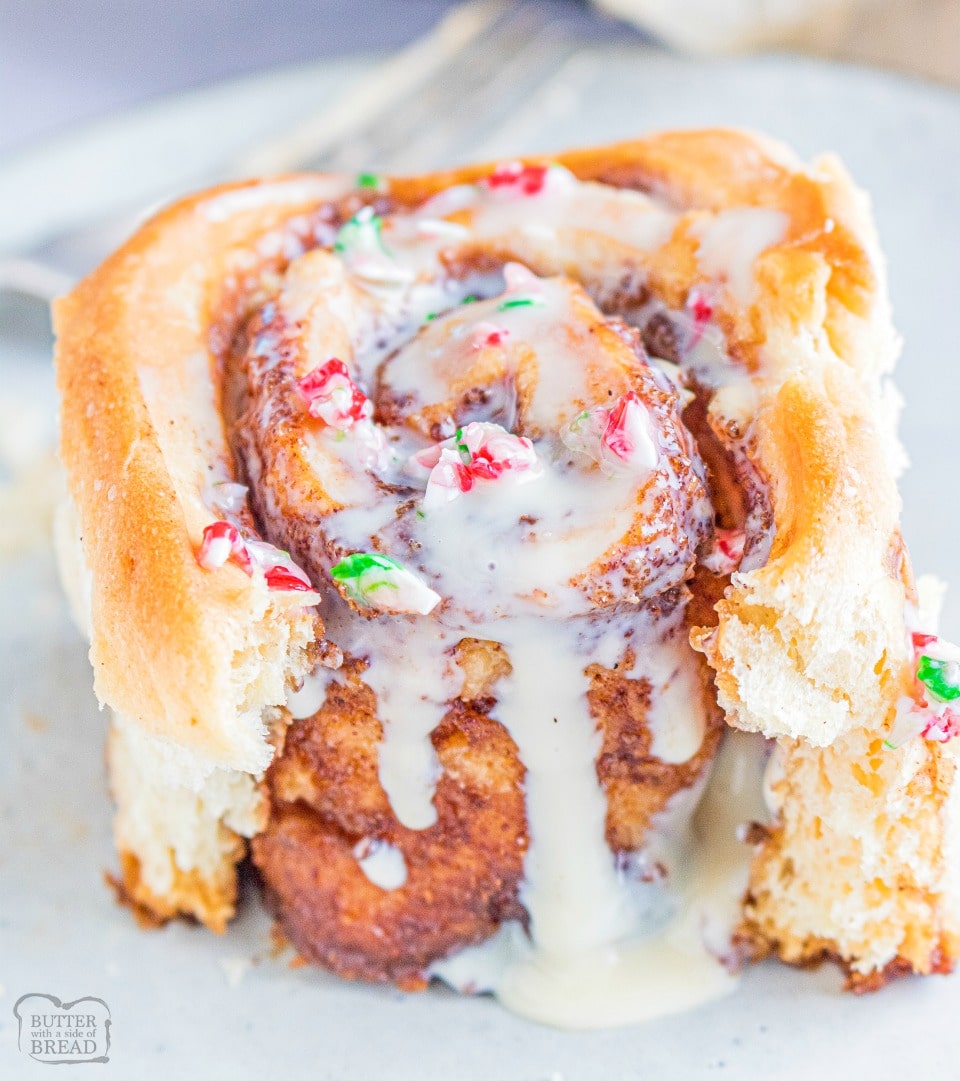 Cinnamon Rolls are a delicious and tasty way to wake up on one of the biggest holidays of the year. Of course, in such a busy morning, having a few hacks to reduce time in the kitchen is also a plus. Check out the Instant Pot tips below and how you can make your own gooey cinnamon rolls from scratch – in less time!

Eating breakfast on Christmas as a family is a tradition in many households. Serving up these cinnamon rolls after (or before) unwrapping presents is a great way to start the day with holiday spirit. With white chocolate and crushed peppermint candies, these Holiday cinnamon rolls are sure to hit the spot! 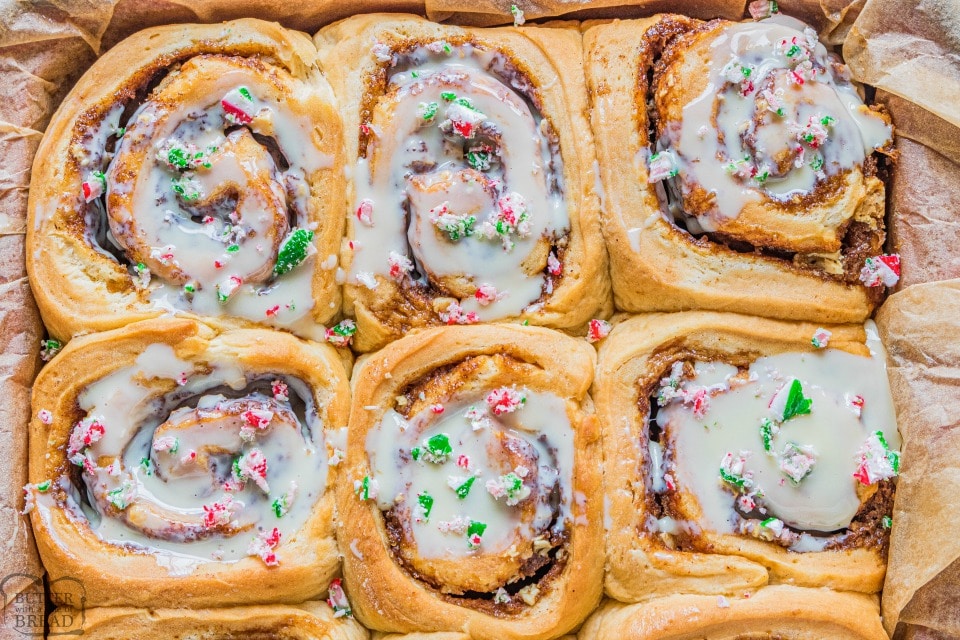 What are Christmas Cinnamon Rolls?

For the dough you will need:

-Milk: 1 cup of warm milk (no hotter than 110F degrees) will help to proof the yeast and give you a delicious fluffy cinnamon roll.

-Sugar: Just ¼ cup of granulated sugar is needed for the dough, this helps to feed and activate the yeast too!

-Yeast: We will need 2 ¼ tsp of yeast, which is about the amount in one packet. Make sure it isn’t expired so that the yeast gives you fluffy rolls.

-Butter: We need ¼ cup of melted butter (half a stick), preferably unsalted butter.

-Egg: Just 1 large egg is enough to bind the dough together.

-Flour: We need 3 ¾ cups of all-purpose flour to use as the base for the dough. This will get us a nice gluten-packed crumb.

-Salt: Just 1 teaspoon of salt is enough to flavor the dough and make it taste delicious. 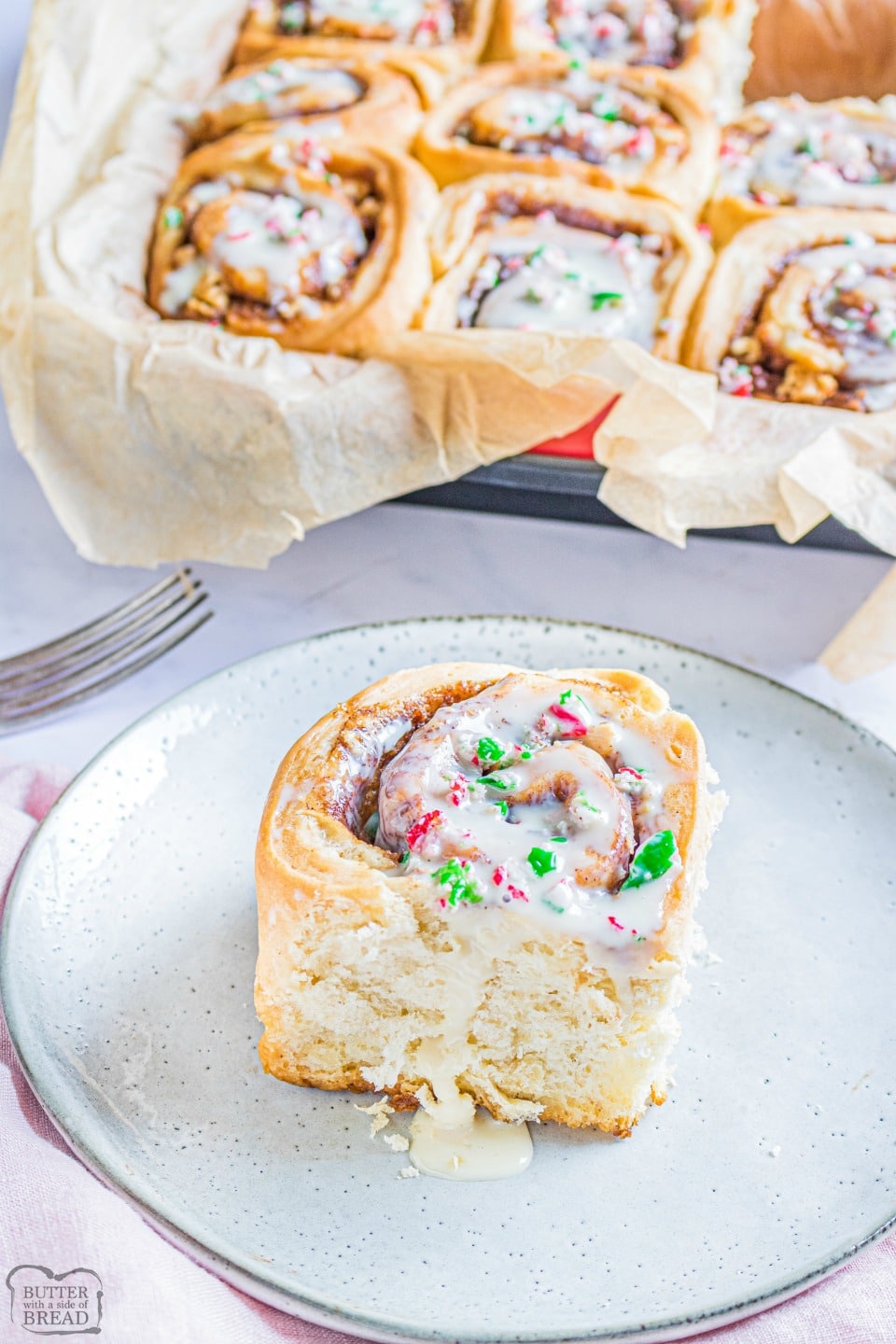 For the filling you will need:

-Butter: Using ½ cup of softened unsalted butter (one stick) we can get  rich buttery taste and help the dry cinnamon filling to stick to the dough and not fall out.

-Brown sugar: With ½ a cup of dark brown sugar we can get a rich and deep flavor from the sweet sugar and molasses. Yum!

-Cinnamon: Cinnamon rolls would be nothing without a little cinnamon. But we want 1 tablespoon of ground cinnamon to make these rolls completely irresistible.

-White Chocolate: With 100g of chopped white chocolate we can make a filling that is unlike any other.

For the glaze and topping you will need:

-White chocolate: With 50g of chopped white chocolate we are going to melt them down into a sweet and delicious glaze.

-Vanilla extract: ½ a teaspoon of vanilla extract packs a lot of flavor, even more so if you use high-quality vanilla.

-Candy canes: We need 2 candy cane sticks that have been crushed. This is a fun task for kids if you place them in a Ziploc and hand them a rolling pin to smash the candies. 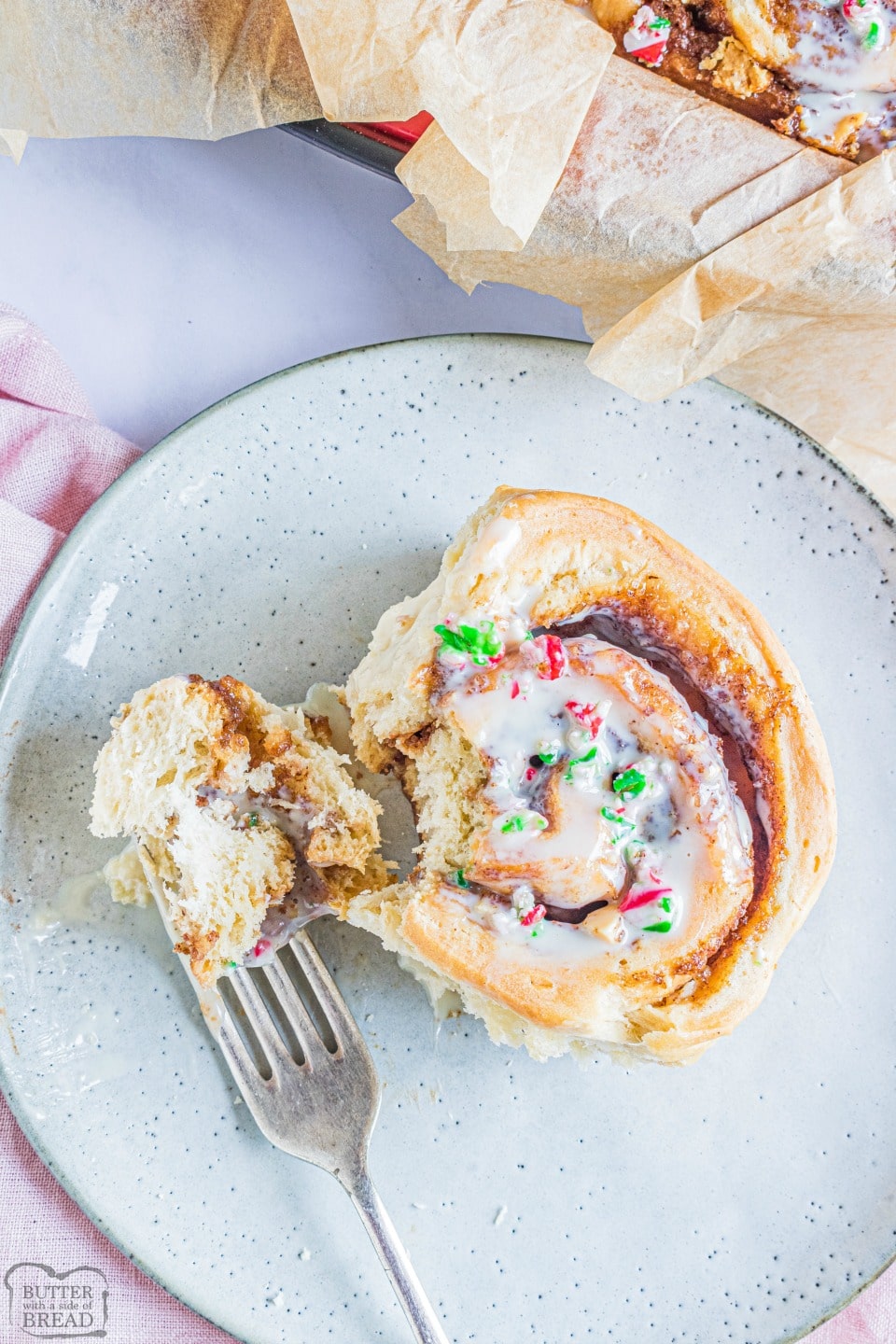 How to Make Christmas Cinnamon Rolls

Here’s how to make these festive holiday cinnamon rolls:

Add your warm milk, sugar and yeast to the bowl of a stand mixer and whisk them together. Cover and let the bowl rest for 10 minutes.

Add in the melted butter and the egg, whisking until combined.

Add the flour and salt and then mix until the dough starts to form. Change the attachment to a dough hook and then let the machine knead it for 2 whole minutes, the dough will be a bit sticky. 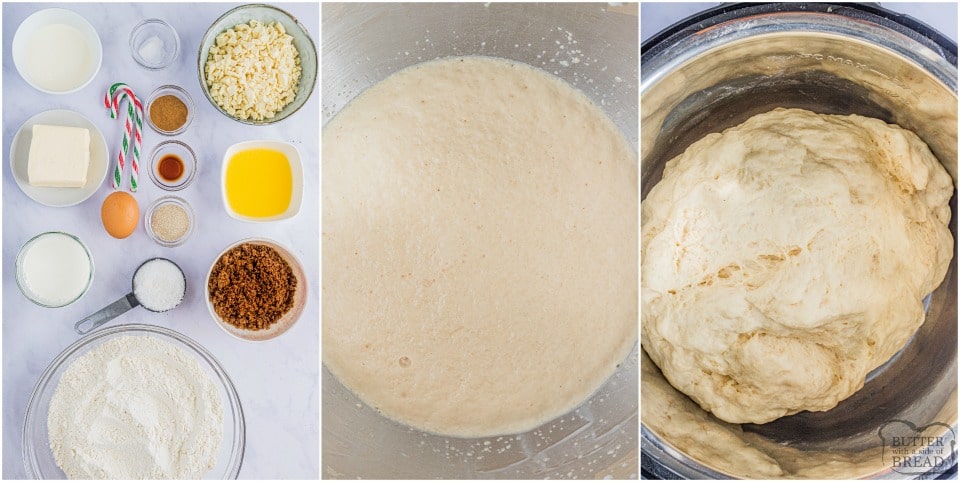 First Rise- In the instant pot!

Transfer the dough to your Instant Pot and close the lid. Set it to Yogurt Mode and leave it to rise for 20 minutes or until doubled in size. Alternatively, you can place the dough in a greased and covered bowl for about an hour until doubled by leaving it in a warm place.

Preheat your oven to 350F degrees and line a 9 inch square baking dish with parchment paper.

Remove the dough from the Instant Pot (or bowl) and then roll it out onto a lightly floured surface. Shape it into a 9×13 inch rectangle.

Spread the softened butter over the top of the dough, leaving a ¼ inch thick border all around it.

Sprinkle the brown sugar and the cinnamon over the buttered dough and then press it into the butter lightly with your fingers to get it to stick.

Sprinkle the top with the chopped white chocolate pieces.

Starting at the long side of the rectangle, roll the dough up into a log and then pinch the seams together to hold.

Slice the dough with a sharp knife (or use unflavored dental floss) and slice it into 1-1 ½ inch thick slices. Trim off the edges on either side and discard since there won’t be enough filling in them. 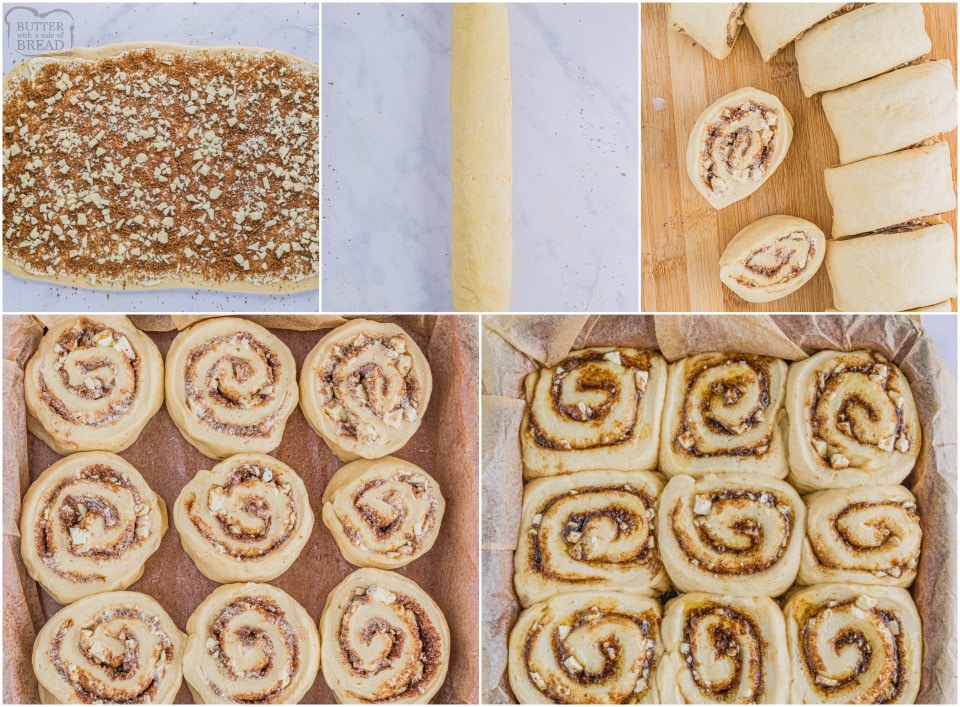 Place the slices in the baking dish and arrange them so that they are evenly spaced. Leave them to rise in a warm place for another 30 minutes.

Bake in the 350F degree oven for 25 minutes or until the tops are lightly golden brown.

Cool on a wire rack for 5 minutes.

How to Make the Glaze and Toppings

Place the heavy cream in a microwave-safe bowl and microwave until hot. (About a minute).

Add in the white chocolate pieces and the vanilla and then mix together until the chocolate is melted.

Pour the warm glaze over the cinnamon rolls and then top with your crushed peppermint candies. 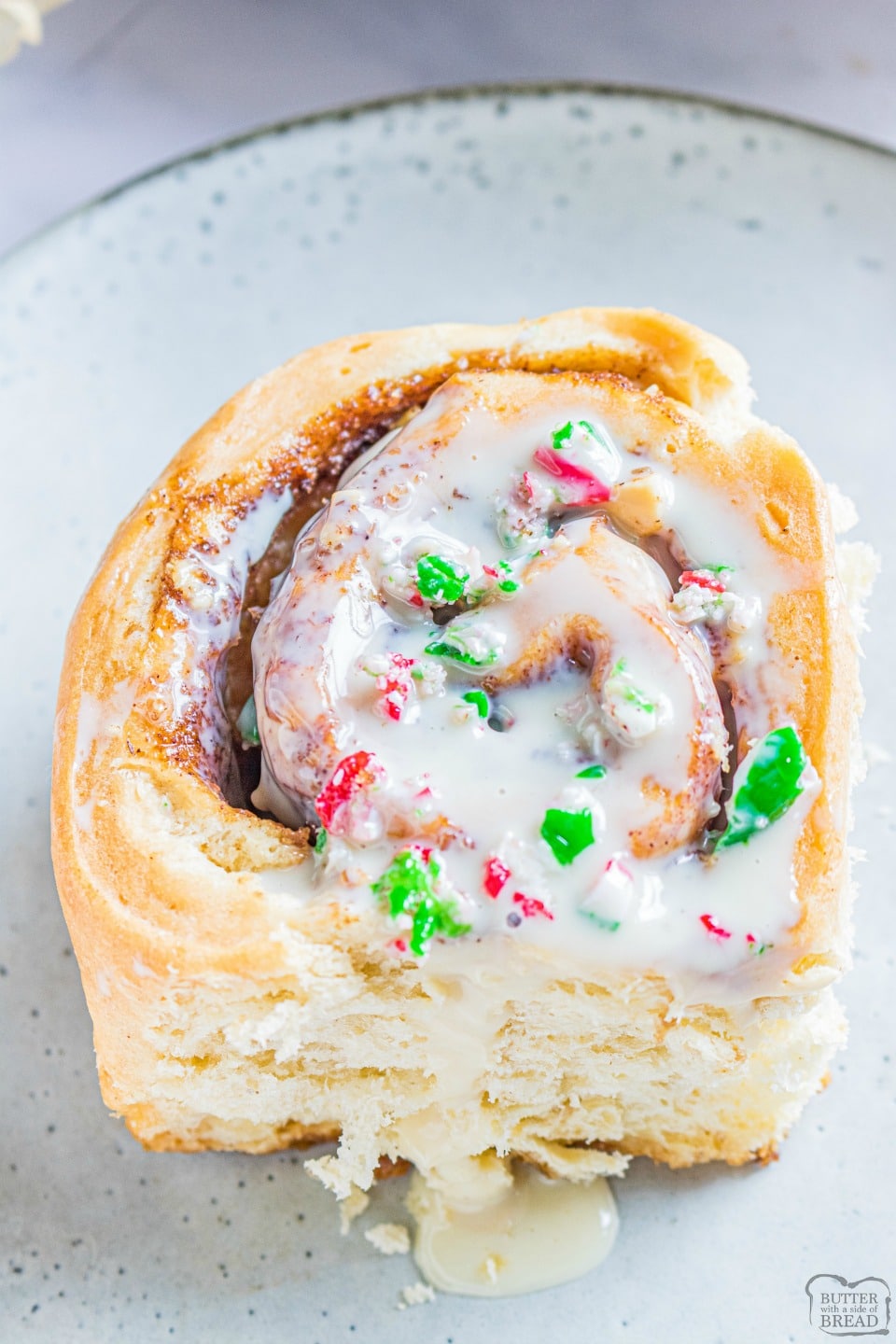 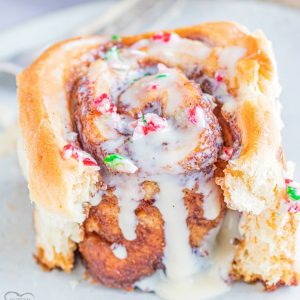 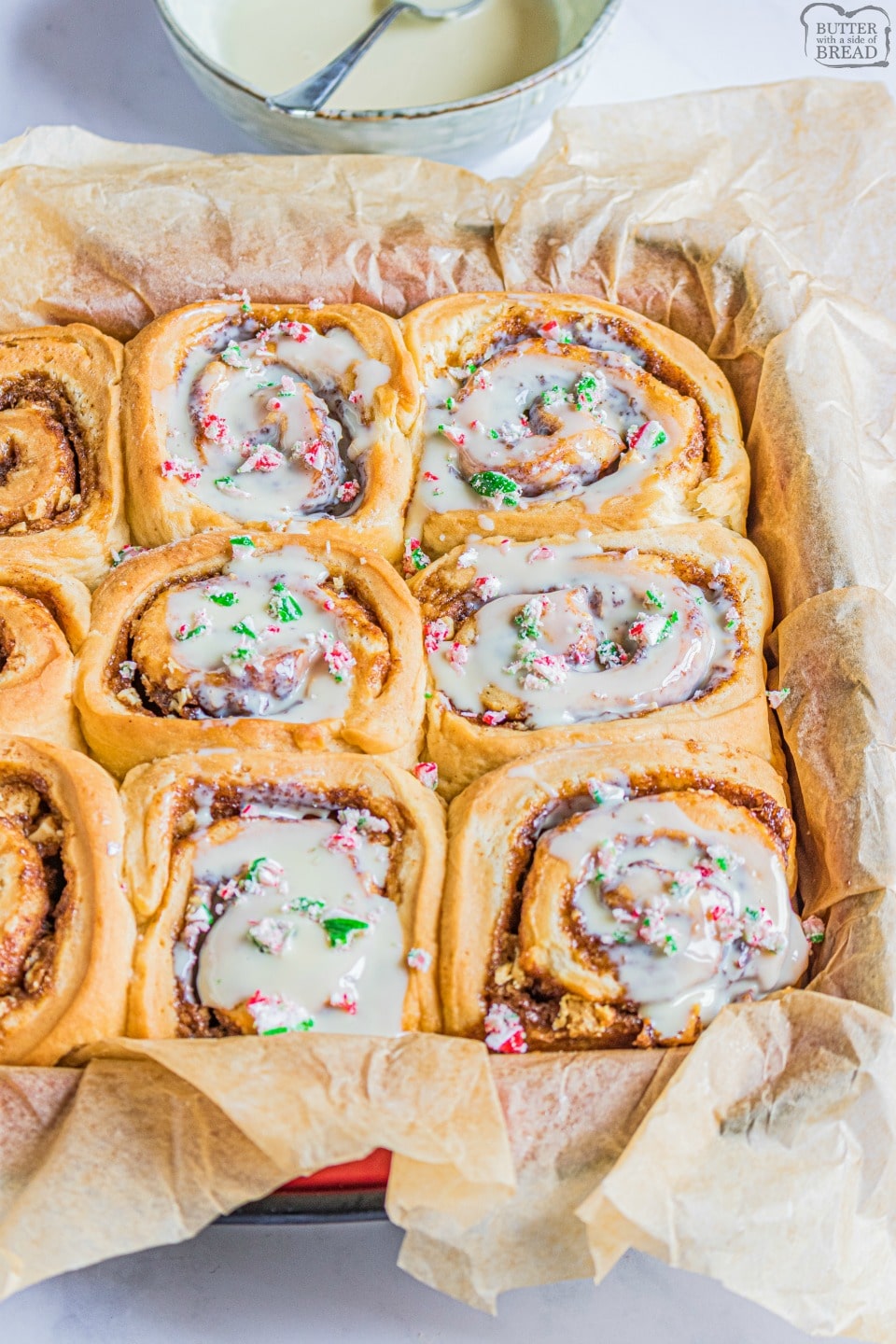 Can cinnamon rolls be frozen?

Yes! Cinnamon rolls can be frozen before or after baking. Simply follow the recipe as directed and right after arranging the cinnamon rolls on a baking tray, freeze them instead. Then thaw on a counter and bake as directed. They’ll rise as they thaw for a few hours. This is great for making them in advance!

Can I make cinnamon rolls the night before?

Yes, you can. Simply follow along with the directions as instructed and right when you come to the point of the second rise, instead of letting the rolls rise in a warm spot on the counter, cover them in greased plastic wrap and tuck them in the fridge. Let them sit there for no more than 8 hours, and then rest on the counter for 30 minutes as you preheat the oven in the morning. Now you can eat fresh Christmas cinnamon rolls on a busy morning without the hassle!

Can cinnamon rolls be left out?

While they could, you should always try to keep them well covered. This keeps them from drying out and becoming stale. A soft and fresh cinnamon roll always tastes best! 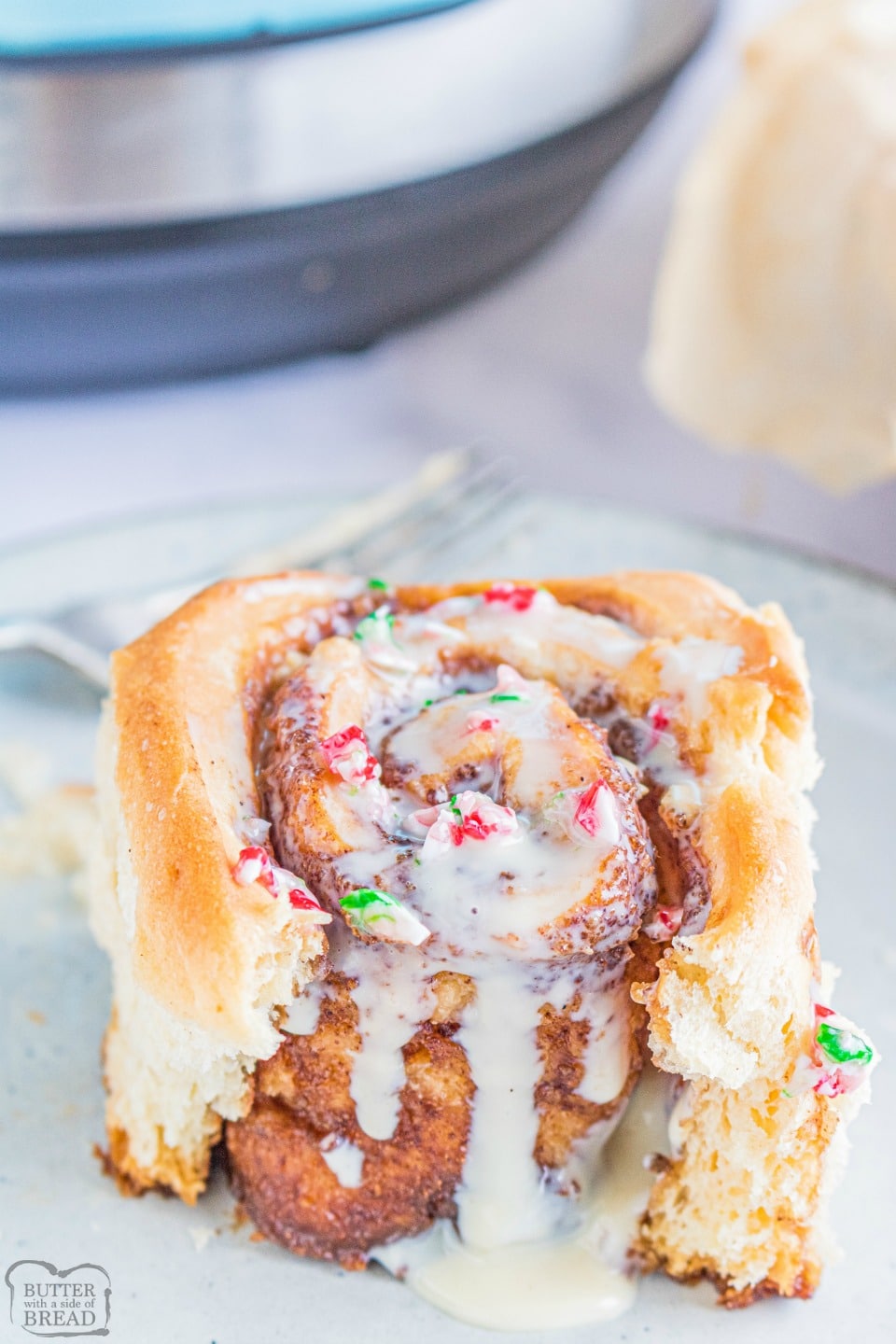 Looking for More Christmas Recipes To Try? Check Out These Festive Ideas! 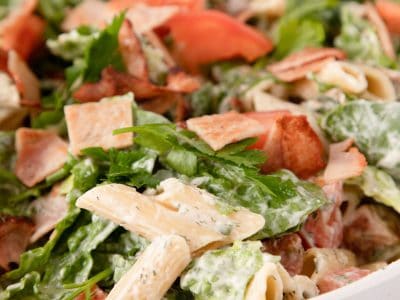 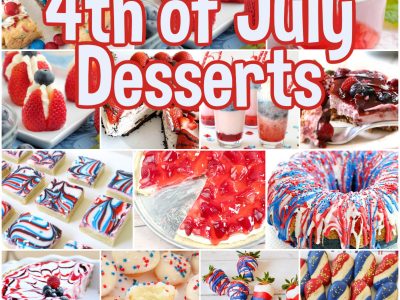 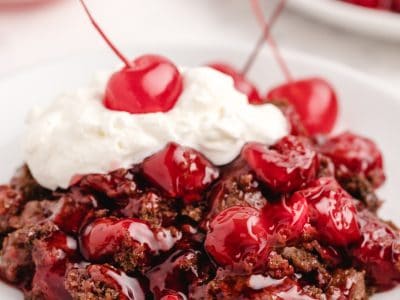 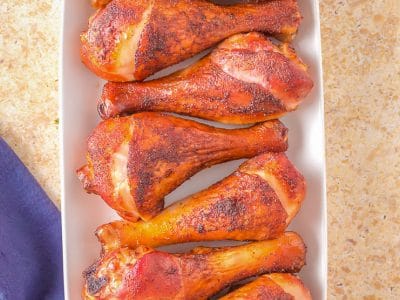 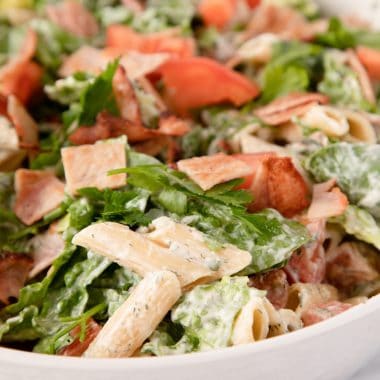 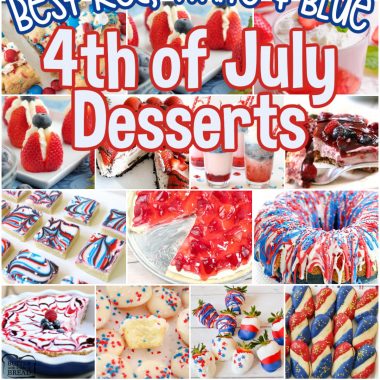 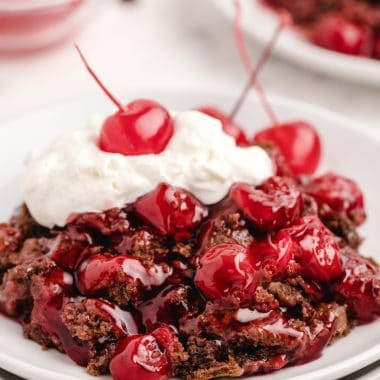